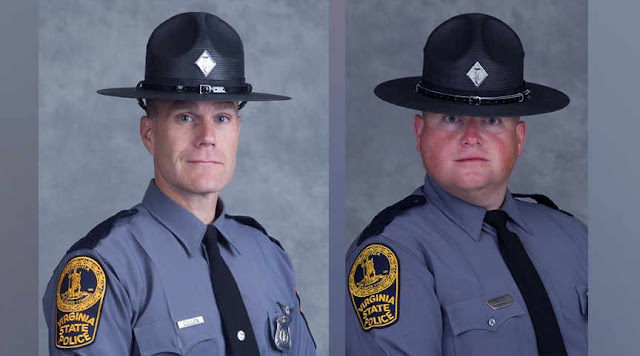 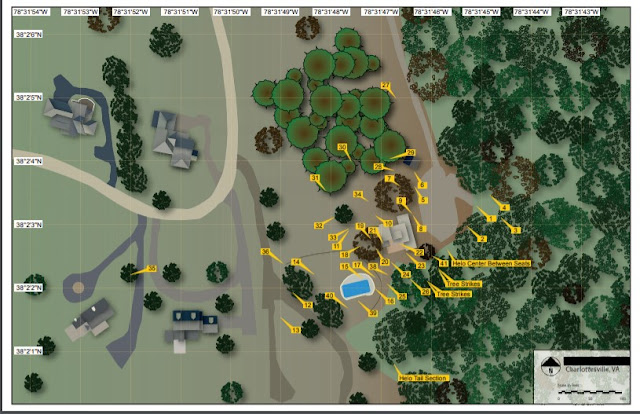 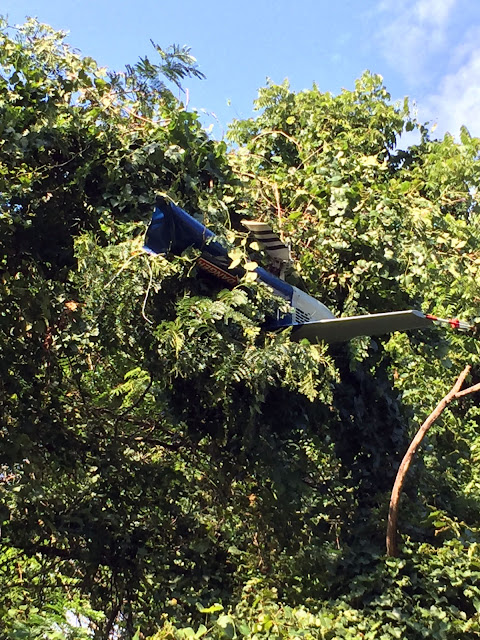 The National Transportation Safety Board traveled to the scene of this accident.

On August 12, 2017, about 1649 eastern daylight time, a Bell 407 helicopter, N31VA, was destroyed when it was involved in an accident in Charlottesville, Virginia. The pilot and the observer were fatally injured. The helicopter was operated as a public aerial observation flight.

According to the Virginia State Police (VSP), the purpose of the flight was to provide the VSP command center with a continuous video downlink of the public demonstrations that were occurring in Charlottesville. The helicopter departed Charlottesville Albemarle Airport (CHO) about 1600. The helicopter arrived over the area of the demonstrations at 1604 and remained there until 1642 when the flight crew was tasked to provide overwatch for the Governor of Virginia's motorcade. At 1643, the flight crew advised the VSP command center that the helicopter was heading directly to the motorcade and was about 30 seconds away.

The VSP interviewed 47 witnesses to the accident. Although their descriptions of the helicopter's altitude, direction of flight, and velocity varied, most witnesses reported that the helicopter, after initially hovering, entered a rolling oscillation, began to spin about its vertical axis, and descended in a 45° nose-down attitude while continuing to spin. Witnesses reported that they lost sight of the helicopter below the tops of the surrounding trees and then observed a plume of smoke rising from the area.

Video from a security camera located about 1.2 miles from the accident site captured images of the helicopter in a vertical descent with increasing vertical speed as the helicopter continued to descend toward the ground. Still photographs taken by a witness showed that the helicopter was spinning in a clockwise direction (when viewed from above the helicopter).

During this mission, the accident helicopter was configured with single main controls at the pilot's station and locked out pedals at the copilot (observer) station.

The accident helicopter's turbine engine had a full authority digital engine control (FADEC) system. The engine control unit (ECU) would continuously monitor the FADEC system for faults and would alert the pilot of any faults that could significantly impact engine performance.

The accident helicopter was also equipped with an airspeed-actuated pedal restrictor control system (PRCS), which reduces total left pedal travel at higher airspeeds by automatically adjusting the left pedal's forward stop. When the helicopter accelerates above 55 knots indicated airspeed (KIAS), the PRCS solenoid energizes, engaging a cam that limits forward travel of the left pedal by 25%, which reduces tail rotor blade angle from 25° to 17° When the helicopter decelerates below 50 KIAS, the PRCS solenoid de-energizes, which disengages the cam and enables full forward travel of the left pedal.

A sounding (a high-resolution rapid refresh model) for the accident site and time depicted a light and variable wind of 3 knots with clear skies over the accident site. No significant turbulence or wind shear was detected.

The main wreckage came to rest in an upright position along a magnetic heading of 333° in heavily wooded terrain that was adjacent to a residence. The main wreckage comprised the main fuselage (cockpit and cabin), aft fuselage, forward section of the tailboom, midsection of the tailboom (including the horizontal stabilizer), main rotor system, and engine. The main wreckage showed damage consistent with impact with trees and the ground. The main fuselage, aft fuselage, main rotor system, and engine were thermally damaged from the postcrash fire. The landing gear exhibited multiple fractures and a flattened appearance.

The aft section of the tailboom, containing the tail rotor gearbox, tail rotor, and vertical stabilizer, was found about 40 ft above the ground in a tree and about 100 to 150 ft south-southwest of the main wreckage. Debris from the fragmented tailboom was found in a debris field that spanned about 300 ft in length west of the main wreckage. Examination of the fragmented tailboom sections revealed multiple angled cuts consistent with main rotor blade contact.

The engine was found in the main wreckage lying on its right side near its installed location. All engine mounts had fractured in overload. The engine exhibited impact damage and was bent at an angle of about 30° at the junction of the turbine and gearbox modules. All major components for the engine were found at the main wreckage site.

The oil and pneumatic lines were manually checked and none showed evidence of looseness. The leading edges of the compressor impeller blades exhibited evidence of hard-body foreign object debris ingestion.

The ECU was found in the main wreckage near its installed location with one of its electrical connectors still attached. The ECU exhibited thermal damage due to the postcrash fire.

A pitot-static test bench was used to functionally test the pedal restrictor control unit (a PRCS component). The unit responded normally in activating and extinguishing the PRCS engagement and solenoid activation lights when pitot-static pressure (to simulate airspeed) was increased and decreased, respectively. The solenoid functioned normally when power was applied to it. Functionality of the emergency release cable was confirmed.

During the investigation, no evidence was observed to suggest that the accident was the result of a mid-air collision involving another aircraft, or object, and examination of samples taken from the main rotor, nose, windscreen, and cockpit areas were examined for microscopic avian material. No bird remains were found in any of the samples.

The Virginia Department of Health, Office of the Chief Medical Examiner, Richmond, Virginia, performed autopsies of the pilot and the observer. The pilot's cause of death was blunt force injury to the head, torso and extremities, and the observer's cause of death was blunt force injuries to the head and torso. The autopsy also identified the pilot's moderate coronary artery disease with a 60% stenosis of the left anterior descending coronary artery. The remainder of the heart examination was unremarkable.

Toxicology testing at the FAA Forensic Sciences Laboratory were negative for the pilot for carbon monoxide, ethanol, and all drugs tested. The testing for the observer detected naproxen in his urine samples. Naproxen is a non-narcotic analgesic and anti-inflammatory agent that is available over the counter and as a prescription. Carbon monoxide and ethanol were not detected in the observer's specimens.

ASR-9 radar data showed that the helicopter left the downtown Charlottesville area about 1644:00 and flew to the southwest and then to the north. The terrain below the helicopter had an elevation from 300 to 600 ft. The helicopter's maximum groundspeed was above 100 knots early in the flight and then varied from 5 to 80 knots during the rest of the flight.

After 1648:16, the helicopter's low forward speed while descending put it in or near a region conducive to a vortex ring state, which is an aerodynamic condition that occurs when the helicopter descends at the downward speed of its own vortex wake. The vortex system accumulates, building in strength and producing increased downwash through the main rotor. The rotor, operating in a high downwash field, is unable to arrest the helicopter's descent rate, even with increased collective. Even though the collective was raised after 1648:20, the helicopter's altitude did not increase. The security camera video and the photographs of the descent, which were determined to be after 1648:22, showed that the helicopter rolled to the left, between 30-57 degrees, as it was spinning to the right.

To determine the effect on tail rotor authority if the PRCS were to remain engaged below 50 KIAS, the National Transportation Safety Board (NTSB) requested that Bell perform calculations to determine the left pedal control margin that would be available for different airspeed conditions with the PRCS cam engaged. The calculations used conditions similar to those on the day of the accident: a gross helicopter weight of 4,633 pounds, an ambient temperature of 86°F (30°C), and a pressure altitude of 2,200 ft.

According to the FAA's Helicopter Flying Handbook (FAA-H-8083-21B), a vortex ring state "describes an aerodynamic condition in which a helicopter may be in a vertical descent with 20 percent up to maximum power applied, and little or no climb performance." The handbook also states the following:

A fully developed vortex ring state is characterized by an unstable condition in which a helicopter experiences uncommanded pitch and roll oscillations, has little or no collective authority, and achieves a descent rate that may approach 6,000 feet per minute (fpm) if allowed to develop….

Situations that are conducive to a vortex ring state condition are attempting to hover OGE without maintaining precise altitude control, and approaches, especially steep approaches, with a tailwind component.

When recovering from a vortex ring state condition, the pilot tends first to try to stop the descent by increasing collective pitch. The traditional recovery is accomplished by increasing airspeed, and/or partially lowering collective to exit the vortex. In most helicopters, lateral cyclic thrust combined with an increase in power and lateral antitorque thrust will produce the quickest exit from the hazard.

According to the FAA's Helicopter Instructor's Handbook (FAA-H-8083-4), vortex ring state (also known as settling with power) can safely be introduced and practiced at altitudes allowing distance to recover. The handbook also states the following:

Ensure the student understands that settling with power can occur as a result of attempting to descend at an excessively low airspeed in a downwind condition, or by attempting to hover OGE at a weight and density altitude greater than the helicopter's performance allows….

Recovery is accomplished by…if altitude allows, reducing collective and lowering the nose to increase forward speed. This moves a helicopter out of its downwash and into translational lift. When the helicopter is clear of the disturbed air, or downwash, confirm a forward speed indication and initiate a climb to regain the lost altitude.